The high road? Or the low road?? Aah – the shady road!

So what is it really like to live in Chennai? Unsurprisingly this will be an ongoing theme and will be added to whenever I feel like sharing the latest warming moment.

Apologies for repetitions here as I have been talking about this for some time through e-mails. Now it is time to start to bring it all together. This month (well the period from 4 to 29 May to be precise) is known in Tamil as Kathiri or Fire Star month. That is because it is hot! Hot is in the low to mid 40sC. All I can say is – it is so hot even the AC (which I usually try to do minimise) can only get down to 27 C. If I go from the bedroom (at 27C) to the living room I feel as if I have walked from the fridge to the oven, and even the other side of the door is hot to the touch. When I was moaning recently about the heat, I was reminded me that 27 C is considered heating, not cooling in Scotland!!

To show how I understood about the fire star month, I thought I would show off one of my 7 words of Tamil to a colleague. I said (I thought) – “well it is the fire star month isn’t it”? She looked at me – shocked and aghast – I thought – my goodness I have really astounded her with my amazing linguistic abilities. It transpired that I had told her to “shut up” which is why she was so shocked!

The reality of fire star month is that it is so hot that it is even hard to walk to work. I live a 10 minute walk away from the office, and I usually consider this not enough of a walk. However, I have to lug my work stuff and before I have even got to the gate of the building I live, I have decided it is too hot (again!) to walk. To be fair, I do try anew every new day.

Actually I find hard not being able to walk. I live on the same street (but at the other end) as the office and when I do walk, I take the longer way. It is about 4 minutes longer and I do this for a few reasons: 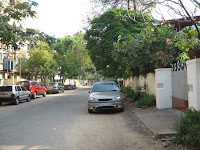 1. instead of being on the busier road it takes me through leafy pleasant side streets – which are also shaded. 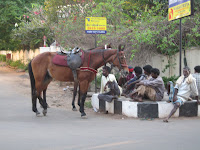 2. the pavements in Chennai are pretty amazing – especially if you are not exactly tall. They are higher than my knees and no sooner than I have clambered up on one pavement than I have to descend again, only to have to climb again a few seconds later. My longer route minimises pavement interaction and saves me from suffering altitude sickness before I reach work
3. the road is easier to cross when I don’t cross at the main junction. This means that I save the extra few minutes on the longer route as I actually spend so long pathetically dithering at the roadside. This dithering is exacerbated by the line of auto drivers who are convinced that I am waiting for their auto to take me the 37 yards to the office.
4. The juice shop. The wonderful, delicious juice shop. If I take the longer route then I can stop at the stall which sells freshly squeezed any fruit for between 10 and 15 rupees (we are talking less than 20 pence and maybe 30 cents) which provides the perfect nutritional boost before I start work. I usually take two! That is also two fruit portions – which for 20 rupees for a Scot is not scarily healthy and represents exceptional value for money!! It is vital that I remember though to ask for no sugar – otherwise a cup full of sugar is tipped into the mixture before my eyes, which must counteract the nutritional benefits. This, however, has been complicated a little by the opening of another juice shop two doors away from my home. And they have a kind of happy hour deal. Buy one (half a litre) get half free. How irresistible is that?? So I can sit with my ¾ litre of watermelon juice for 10 rupees and then take my lovely shaded route to work.

to the other extreme...

From the most southerly point and the remote Andamans I then headed north to Darjeeling for family rituals. I don’t think my case actually got unpacked properly, rather I swapped the cooler cottons for warmer clothes and ran straight from a meeting to Chennai airport again!

I had to stay overnight in Kolkotta or Calcutta, whichever you prefer, before the connection the next morning to Siliguri and then car up to Mirik. I was soon in Mirik itself, just in time for the funeral rituals I had travelled for, and straight into the gompa (prayer room) and the lamas and family chanting. It was an emotional return and I was glad to be there at the right time. 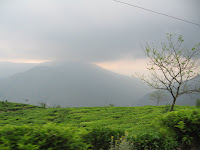 Once the key rituals were complete I had a very welcome cup of tea and then compulsory food, Nepali style.

I love Mirik. It is a really pretty hill station, not on the main tourist trail, but most of all it reminds me intensely of Scotland, particularly rural Perthshire where I grew up. The pine forests and lake (it should be a loch!) shrouded in mist are incredibly reminiscent of Scotland, and even the Buddhist Monastery on the hill, rolling tea green gardens, orange plantations and cardamom fields can’t take that impression away. 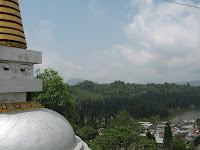 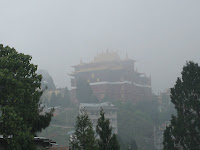 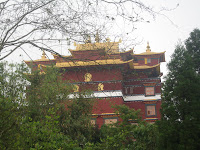 We spent a few days in Mirik, walking, visiting family, spending time at the Monastery and generally soaking in the very different surroundings to the South. The weather was so much cooler than Chennai - but then Mirik is 5,700 feet above sea level and Chennai is hardly any feet above sea level! 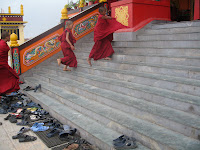 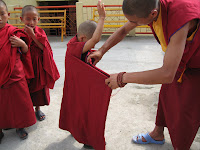 From Mirik, we headed to Darjeeling to see more relatives for two days before we 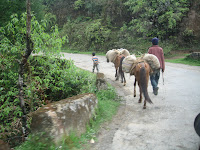 had to return south. The road from Mirik to Darj (as it is known) is a lovely route, a kind of back road north. It skirts alongside the Nepal border and we pass villages where the house is in India and the outside toilet is the other side of the white stone border marker so located in Nepal.

Our time in Darjeeling was restful, if packed, and we met up unexpectedly with friends from Nepal which was lovely. 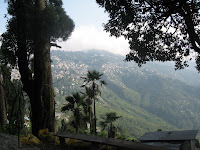 Darjeeling keeps itself in a time warp and the town itself has an attitude, rightly proud! The famous toy train tracks twist alongside the road, houses and shops all the way from the flat terain, and the trcks are used ingeniously to transport water, chickens and whatever is needed when there is no train there. 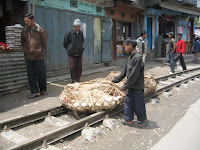 The last day saw us travel from 8,000 feet - up in the clouds, back via Siliguri and Calcutta/Kolkotta to Chennai. We arrived late in the evening, walking off the plane into the heat and humidity whch is with us now until the rains arrive. 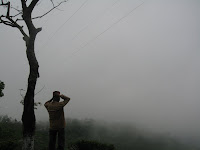 April disappeared in a complete whirlwind, and with it I am not sure how many miles or kilometres. Then I blinked and May is disappearing too. So sit tight while I put it all together ………………………..


The southernmost tip of India is Cape Comorin at Kanyakumari and is renown as the point where three oceans meet – the Bay of Bengal, the Indian Ocean and the Arabian Sea. At this spot crowds gather every year in to greet the monsoon as it reaches India. It is also a part of the coast where the tsunami struck really badly, particularly from Kanyakumari along the southern coast up towards Trivandrum.

My trip to KK (as it is called) started with a dash to the train station to catch the evening train from Chennai. Evening starts quite early here and I have even heard 4 pm called evening. My train was at a respectable 5.25 pm and as I settled into my berth I phoned my colleagues who had left the evening before, to confirm I was on my way. I had that comfortable feeling you have when you know you are getting off at the final stop so no worries about delays and recognising the right station. Until I was told that I had to alight half an hour before KK town itself at a place called something I couldn’t make out. Finally we worked out that it was Nagercoil and that I would reach around 6 the following morning. Just as well I had phoned!

The journey was pleasant – particularly as I was reading a book set on the Bangalore express to Kanyakumari, and also because the TT (Ticket T-something) official told me I could sleep in the lower berth – seeming because of my age – well thank you anyway! Rather more comfortable! 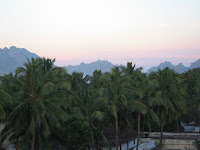 We rolled into a station just before 6 in the morning, and my anxiety started me thinking this was my stop, even though it was well before the due time. It was still dark, but within a few minutes the sky was becoming lighter and turning pink. I could make out hills which rather surprised me, and a forest of windmills – of all different sizes. The landscape really surprised me – I had expected flat land and this was lush paddy, palm trees and the lower part of the Easter Ghats range.


Our work took us to many of the tsunami affected villages over the following two days, but the context was ver 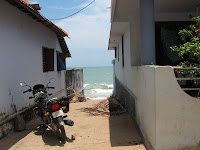 My colleagues returned to Chennai and I stayed on for further discussions, returning back via Trivandrum a day later. On the way back we stopped off at Kovalam Beach and I was treated to 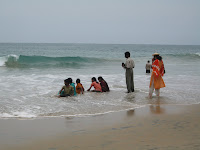 one of my favourite sights in India – swimming and paddling fully clad. It is lovely to watch people having such fun in the water, and of course modesty is totally maintained for the Indian context.


Then back to Chennai to sit my wee suitcase in the corner of the bedroom for two days before it headed off again………..


Posted by Feisty Blue Gecko at 15:39 No comments: