Colours of the south 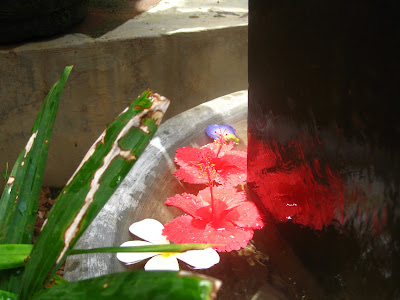 A rather creative water and flower arrangement in the south of Sri Lanka - and a taste of the next instalment.........
Posted by Feisty Blue Gecko at 19:14 No comments:

As I boarded the aircraft from Doha for Islamabad, I realised I was squeezed into a tiny seat on the huge airbus. Hope that I would have the 2 seats to myself for the 4 hour flight which would arrive in Islamabad at 3 am was soon dashed as a fellow traveller arrived at my row, gestured towards the seat and started to settle in next to me. He was a really interesting looking character, in very traditional Afghan attire but as I hoped to grab a short sleep before the crazy arrival time and anticipated stress at immigration, I kept my guard up and didn’t make an effort to engage in small chat. Neither did he.

As the plane took its passengers on board and prepared for departure, my sputnik (fellow traveller in Russian – literally someone who travels on the same path as you do) also prepared for departure. He donned his traditional head scarf and started a gentle chant accompanied by a rocking motion. His mantra took several minutes and accompanied the security announcement of the flight crew. At some invisible signal the prayer was over, our safe passage assured and the chanting ceased and his scarf was removed.

As we prepared for take off we exchanged pleasantries and names. He told me he had been in the UK and was the head of an NGO working in Pakistan and Afghanistan. He asked me about my job and when I gave vague details of my organisation, he immediately named it and asked if that was who I worked for. This eroded part of the awkwardness between us and we soon started a warm discussion about work in the area. I told him about our work in India and Sri Lanka and he told me about the challenges of working in Pakistan and Afghanistan.

When I said I was from Scotland he said that he had worked with a colleague in the UK who was from Wales. “Is that like Scotland?”, he asked – meaning not England! ”Yes” I replied, ”very much so! ”

He wanted to know about Scotland, he said. I anticipated the usual questions – our national food, industry and history. And bagpipes.

Sure enough, I found myself describing the delights of haggis, detailing how it is prepared and its origins a staple of the rural poor in Scotland. He described the different regional specialities of Afghanistan and dishes of meats marinated in spices and yoghurt and served with exotic fruits and vegetables. If I ever visited Afghanistan he promised to make sure I tasted the most delicious of traditional dishes, which varied enormously from area to area.

Not too difficult, I thought. “Barley, wheat, oats….”I recited.

”And what about livestock – what animals do you farm? ”

Also an easy one.

”Ah. So what is your livestock population then?”

Silence. I have absolutely no idea. And at 38000 feet I have no access to Google to find out.

I resort to one of the most useless facts I have at my fingertips, which is at last useful.

“I don’t know about Scotland but do you know, that Mongolia is half the land size of India, and the human population is only 2.6 million. Isn’t that amazing? And the most interesting thing is that the large livestock population is 28 million. Incredible, isn’t it?”

But I have no idea about the livestock population in Scotland. Absolutely no idea at all.

“So what would be the price at market of an average sized sheep then? ”, he asks.

Please ask me about rocket science, I think to myself – at least then I wont feel so bad that I have no idea.

I guess wildly “well, I don’t really know, but I would think you would pay around £500 at least for a good sheep”. Quite what the basis is for that guess, I am not sure.

”Aaah. And what would the weight be of an average sheep then? ”

My eyes scan the aircraft and passengers for inspiration. My brain develops a sudden ability to operate some desperate sift, sort and search action. With no result. Sheep are heavy. Heavier than a grown man? Groan – I just have no idea.

I blurt out the first figure that I can think of.

”50 kilos”. Where did that come from? No idea, but that is what came out of my mouth.

”So it must be around £10 a kilo for sheep meat then?” He calculates.

My silence and stupid smile tell him that it must indeed be.

I am rescued by the arrival of our in flight catering and both of us are unable to chew our Qatari cuisine and talk at the same time.

The lights are dimmed immediately after eating and conversation is replaced by a companionable silence and attempts to doze before arrival in Islamabad.

We exchange cards at the airport and I make a firm promise to find out the answers to his questions. I have been reminded of a very different set of priorities and feel an sudden and urgent need to know more about my country.
Posted by Feisty Blue Gecko at 17:59 1 comment:

On the first morning in Islamabad I went exploring with my colleague in the neighbourhood where we were staying.


He was pretty hungry and we were drawn to a set of food stalls serving mysterious food. At one stall, a dish of sizzling meat and veg was being served up for a customer and this was just too tempting for my colleague. "I think I'll have one of those!" he announced.

A guy was summoned from another stall to communicate and my colleague was able to order one of the tasty looking dishes - "You want one tag-a-dag?" he was asked. That sounded great and one tag-a-dag was duly ordered.

We stood by watching to see what this was and how it would be prepared. The cook started by taking 6 tomatoes, roughly chopping them with a cooking implement which was very like a wallpaper stripper. They were thrown on the piping hot and very large wok over a high gas flame. Water was poured on and the cook expertly picked off the tomato skins as the tomatoes sizzled and cooked. With a flourish which any TV chef would be proud of, the cook took some offcuts of meat including liver, brain and testicles, and these were added to the tomatoes and more water. These browned quickly and another wallpaper stripper appeared in the cook's other hand. Placing the sharp sides downward he started to chop at the contents of the wok with rapid and rhythmic movements making a distinct tag-a-dag, tag-a-dag, tag-a-dagga dag-a-dag noise, understandable in any language.

A rather large chunk of butter appeared and was tossed into the pot, followed by chillies, garlic and coriander and in a few moments the whole meal was swept onto a plate beside a steaming nan bread.

There you are sir, one tag-a-dag for you - balls and brains for breakfast then, cooked by percussion!
Posted by Feisty Blue Gecko at 17:13 No comments:

Today is Poya Day in Sri Lanka, the day of the Full Moon. I was chatting on messenger the other day from my flat in Colombo, cursing the unreliable and expensive dial up connection. Not to worry, I told my son in the UK, it is full moon on Wednesday so that means we will be able to chat properly.

Now you shouldn't be able to hear a stunned silence on messenger, but it came across loud and clear. Finally my son asked "so what exactly has full moon got to do with your internet connection? Some kind of werewolf.com link?"

The answer is really simple. Every Full Moon or Poya Day is a public holiday in Sri Lanka, so that means I can take myself and my laptop to one of the many trendy cafes in Colombo and use the free wireless connections. I can upload photos and blog merrily and catch up on e-mail. Hence the number of updates today!
Posted by Feisty Blue Gecko at 16:32 No comments:

Trucking and transportation in Pakistan 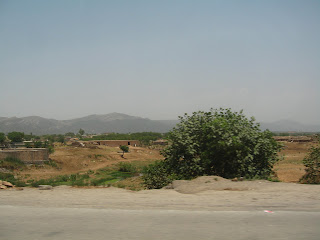 We traveled out of Islamabad on the dusty highway to the ancient site of Taxila and on the way I was fascinated by the trucks. 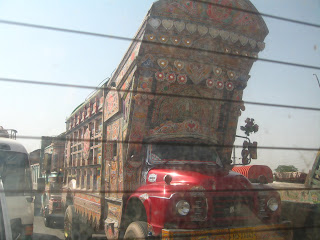 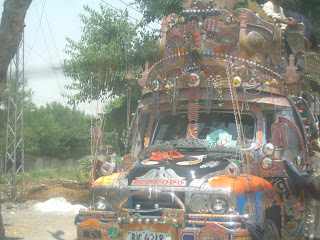 They are ornately decorated and many have old wooden doors which are beautifully carved. 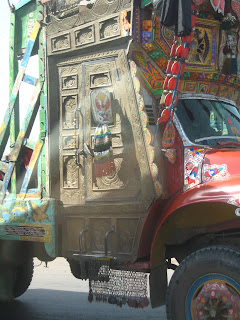 And some interesting sights on the backs of some of the trucks - like a tiger and a horse - and evidently some eminent figure! 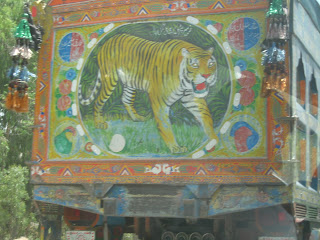 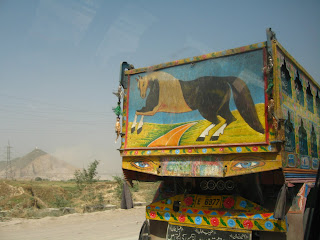 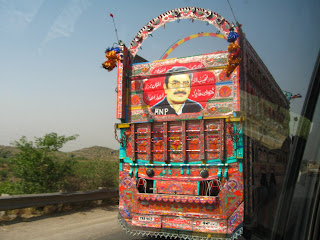 And trucks don't have the monopoly on decoration either - the buses are pretty fancy too, if a tad overcrowded. 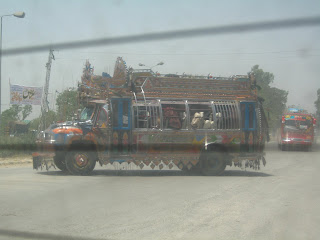 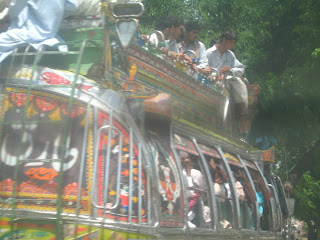 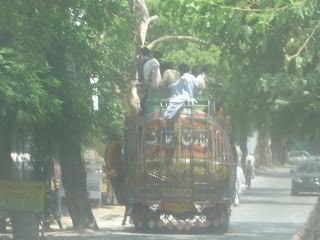 as are the smaller mini buses 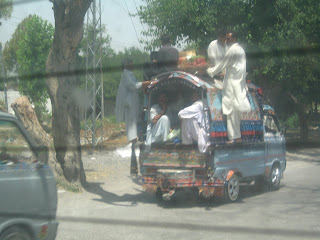 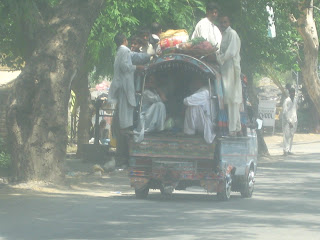 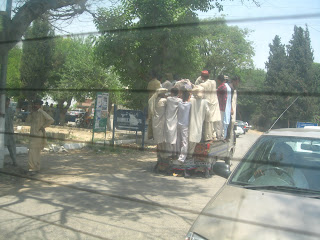 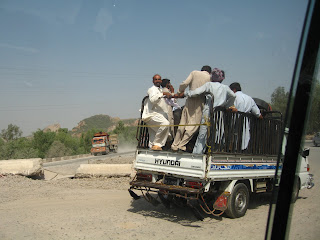 But if you need something a bit less crowded, for example if you want to travel with your favourite buffalo then there are also options for you................. 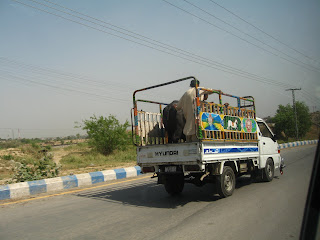 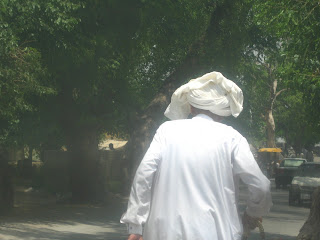 Posted by Feisty Blue Gecko at 19:28 No comments: 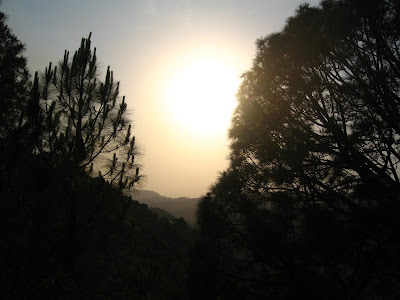 At extremely short notice I was lucky to have the chance to visit somewhere new - some impressions were very different to what I expected. 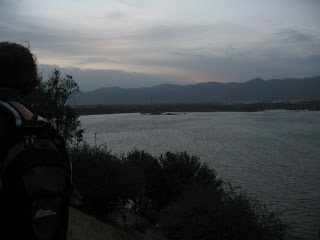 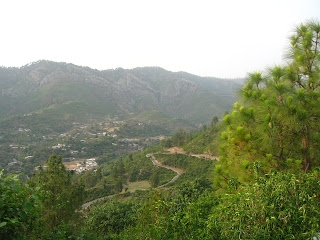 
In fact, this was my first visit to Islamabad, Pakistan 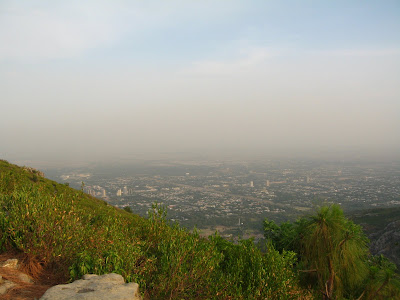 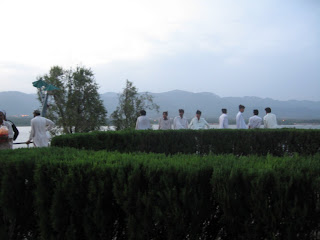 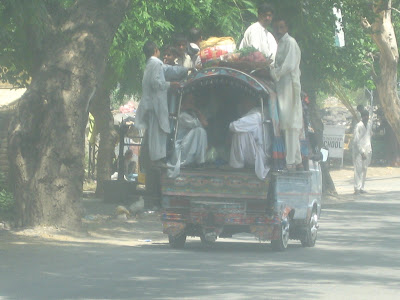 More in the coming days about the journey there, impressions and of course images.
Posted by Feisty Blue Gecko at 20:54 1 comment: