So, monsoon has arrived in Chennai!

Yesterday the skies were unusually grey with the heavy and fully black monsoonal clouds and through the day the rain was constant. With the result that by the time dark fell, my road had transformed to a river incredibly quickly. The pavements are uncomfortably high for walking, but for some time they were able to keep the water at bay. Finally though, the persistence of the rain falling brought the water levels above the pavement levels. There seems to be a bit of an incline on my street, so the water at one end was much deeper than the other. 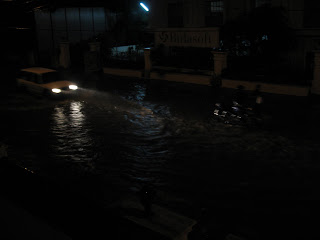 This morning, the river is still there but the rain had eased during the night, so it had receded a fair bit. Heavy winds and the high water had thrown a few trees and rubbish around. 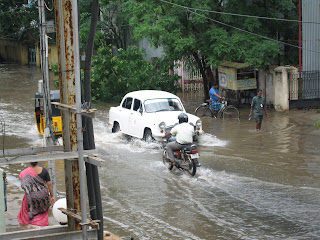 A new view from my window. 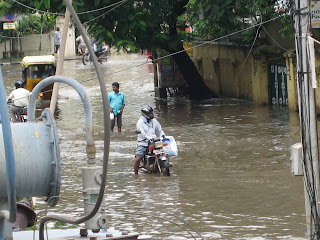 But life in Chennai contines pretty much as normal. 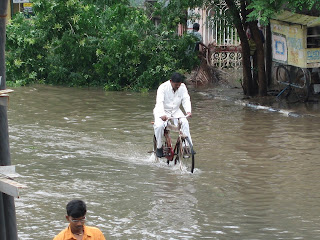 The waters are receding quickly, and at least today I can get out, but there is more rain forecast over the coming days, so it could be waterlogged for a time.

It is important to see this in perspective though. This year India, and other parts of the region, have seen devastating flooding and although the rains have subsided, the damage and after effects have brought terrible destruction and disease. In the south east of the country we are only now seeing our monsoon season, and although the rain is presently disruptive and destructive, it is not on the scale that we have seen in the north where relief efforts are still underway.
Posted by Feisty Blue Gecko at 08:02 No comments:

I have to share some wonderful new Indian English words or expressions which I have learned recently. I have added their definitions according to how they appear to be used….

oracy - proficiency in speaking (like literacy, numeracy..)
analysisation - carrying out an analysis
fill upping - the process of ensuring gaps are met
capacitation - training
unless and otherwise - until
suggestive steps - proposed (suggested) action plan
botheration - challenge or inconvenience
And my favourite was the description of a six sided shape (clearly an impressive one)
- hectacular!
Posted by Feisty Blue Gecko at 23:15 2 comments:

I just love inflight announcements. I sit eagerly while the pilot tells us how at many feet and metres altitude we are flying, how many miles and kilometres per hour, our flight path, outside temperature…….……..

“Ladies and gentlemen this is Captain Sharma, your gorgeous pilot. We are happy to welcome you aboard our flight PDQ 007 to Delhi. Our flight time is an estimated 2 hours and 15 minutes. We are climbing to our cruising altitude of 34,000 feet or lots of metres above sea level and our speed is several squillion miles per hour. We will be flying over Bangalore, Hyderabad and Jaipur before holding over Delhi for a further three hours or until air traffic control clears our landing. The outside temperature is minus 45C, but we are maintaining a comfortable temperature of 23.4C inside the cabin for your comfort. Weather in Delhi is reported at a pleasant 42C with a slight easterly breeze and en route we expect a little turbulence over Lucknow if we get a bit lost. Please relax and enjoy the flight and I will be back later to update you on our arrival time”.

I love it – yes it is pretty meaningless and to be honest, does it make a difference to the flight to know how high, fast, cold the plane is? Nevertheless I listen attentively, soak up all the minute details and watch carefully out of the window to make sure the pilot makes sure to remember to put the flappy wing things up and down as required and worry when I think he has forgotten.

When I first visited India, the flights would consistently disappoint me – everything was fine, except for the total lack of in flight announcements. I was not even convinced that there was a pilot on board as there was complete and consistent silence from the cockpit on every single flight. I wondered if the cabin crew and auto pilot got the flight from A to B. I became resigned to this and gradually tempered my disappointment at the lack of information about my journey. Until one fine day, on a flight from Mumbai to Delhi, when I heard a crackle from the intercom and a male voice started to speak. There were no male cabin crew so I was immediately alert and puzzled. Sure enough, the voice said

“Ladies and gentlemen, this is your captain speaking”

Puzzlement turned to panic – there was clearly an emergency, hijack or some other terrible crisis. I sat anxiously while the Captain continued

“I am pleased to tell you that Pakistan is out for six and India has started to bat”.

Whereupon the whole plane load of passengers burst into applause, cheering and shouting while my panic returned to puzzlement.

This was my first experience of the importance of cricket in India. I had known it was important before but didn’t realise just how much. Since then other examples have consistently reinforced this.

In Delhi airport departure lounge, sitting quietly reading and waiting for my flight announcement I nearly jumped out of my skin when the whole place erupted in cheers and squeals of excitement. A few moments of disorientation later, I realised that a decisive move had taken place on the cricket match being screened in the lounge.

Delhi airport departure lounge two years later - walking into the lounge intending to buy a cup of tea, I was put off by the huge long queue. Approaching the coffee stall I realised that the queue stopped about six feet away from the stall – and consisted of a crowd fixed on the screen, yes, showing the test match live. Incidentally the crowd appeared to include a number of folks employed in various functions in the airport.

More recently, I spotted a group of men playing cricket at a playing field on the outskirts of Chennai – not unusual in itself, but they were clearly keen given that I was passing before 6 am!

And finally, recently relaxing at home very late one evening, I heard a massive explosion very nearby. Although there are some security incidents in the large cities, Chennai feels very safe, so I was saddened to hear the crashing sound. But it continued for ages, and it slowly dawned on me that this was no explosion but celebratory firecrackers on an unprecedented scale – the whole of the country was celebrating that India had won the ICC World Twenty20 Test Match in a nail biting final

So maybe I still don’t understand cricket and its rules, but I am very clear about one thing – cricket in India is top priority!
Posted by Feisty Blue Gecko at 23:04 1 comment: